November 29, 2021 |  Category:   Retirement locations, Travel  |  1 Comment
Author:   Dan LaCombe  posts:  6    Author's   bioXDan LaCombe Background:
Dan LaCombe is a recently (early) retired Planner from the State of Delaware (23 years). He has been active all his life and now, with lots of time yet little money, embarks on one adventure after another, as was his life’s dream. Having taken journalism and photography in college, he worked as a reporter and photographer for the Ridgefield Press, early in his career, where he wrote numerous human interest articles. Several of his letters to the editor have been published in the News Journal. He is a modern day nomad with no permanent address and minimal processions. He plans to document his adventures in order to share this rewarding unconventional lifestyle with others.

The stately Braeside Country Inn was built in the 1930s and is well preserved, well run by Linda, includes breakfast, and is within easy walking distance of the Pictou waterfront where are we had a lovely alfresco seafood dinner with a view of the small harbor.

Nova Scotia was similar to New Brunswick and that masks are required to enter businesses and public places, which for us was a throwback to how it had been many months ago in the States. Nonetheless, we quickly adapted to this requirement, keeping a mask in the back pocket at all times.

In the morning we continued east toward Cape Breton Island – the ultimate destination of our journey. 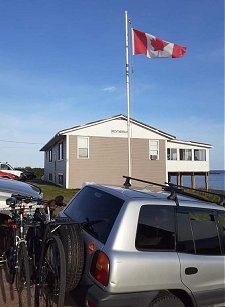 Along the way, we stopped for lunch at one of many delightfully situated picnic tables scattered along the amazing (not to be missed) Cabot Trail on our way to the little town of Ingonish – just outside of the Cape Bretton Highlands National Park. Here we stayed amongst a funky collection of various forms of accommodations right along the Seaside. A group of young people put on an impressive firework show from the beach that evening after we returned from another wonderful seafood dinner down the road at the Seagull Restaurant.

Just outside of Ingonish, we stopped at a General store for a few provisions and the cashier, upon hearing that we were planning to camp in the National Park, emphatically proclaimed that we had to go to Meat Cove (outside of the Park) at the very northern tip of the island and stay at the, “most awesome campground ever.” Being a perfect fit with the theme of our journey, we headed straight to Meat Cove Campground in the morning – and what a spectacularly breathtaking ride it was!

Going counter-clockwise, we traveled through the national park, along the coast, and at the northernmost tip of the Cabot Trail we turned off and were shortly chattering along an unpaved road toward Meat Cove. At the very top of the Cape, the road deteriorated as we drove along the edge of limestone cliffs some hundred feet above the churning ocean below.

This drive is not for the faint of heart, yet the reward is well worth a few skipped heartbeats. It’s truly hard to imagine a more amazing place to camp. You feel like you’re at the edge of the world, high upon cliffs with incredibly stunning views and a lovely accessible beach below to boot! Roasting local lamb chops over the coals of a campfire capped off an incredible first day in New Scotland. 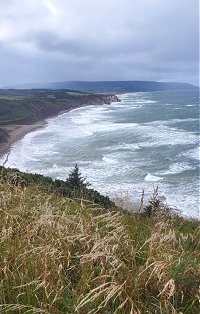 One more memorable night at Meat Cove (huge thunderstorm) and we headed back to the Cabot Trail, through the park, and down the west side of Cape Breton (the best section for amazing views), toward the town of Inverness. Along the way we saw a police car and it struck us that we had not seen a police car nor heard a siren for the eight days that we had been in Canada! Just outside of town, off a gravel road, are a dozen “glamping” sites overlooking the ocean. And we were lucky enough to secure the last available one of these canvas-on-wood-platform accommodations.

Our host brought by a large potable container of water and told us a bit about the area including a trail up to the cliffs which leads to a tiny rustic cabin where the renowned Nova Scotian writer Alister Macleod would muse and do much of his writing.

He warned us to wear long pants as the narrow trail cuts through dense scrub and we were sure glad we did. As we were finishing up our morning hike the drizzle turned to a light rain which would last for the rest of the day and promised to continue through the next, so we decided to hunker down another night before our longest drive to the Eastern Coast of Nova Scotia.

There should be warning signs to bring your own food and have a full tank of gas, because cutting south across the mainland of Nova Scotia and heading west along the eastern coast, there are no restaurants nor gas stations to speak of for a surprising amount of time, until you start getting close to Halifax. In Head of Jeddore, we found another “mom and pop” motel that had cabins. Ours was was closest to the brackish headwaters of Clam Bay. A nice canoe was available for free and in the morning we had a pleasant paddle spotting an otter and various water fowl. 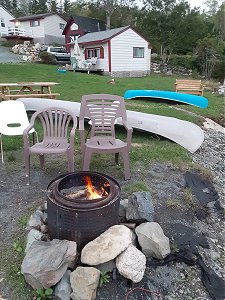 After breakfast at the motel restaurant, we drove to Halifax to have a look around. It was quite shocking to find such a major city after driving through a countryside of hamlet after hamlet. We parked and walked up to the impressive Citadel overlooking the port which had played a significant historical role and continues to be strategically important. The staff inside dresses in traditional Scottish military uniforms adding to the atmosphere of this impressive fortification. Then we tried to find live Celtic music; we failed but did find a few beers along the way and this allowed us to walk around and get a feel for this hip cosmopolitan city.

Our next and final stop was the delightful little town of Mahone Bay with sailboats in the foreground and church steeples in the background as we pulled into the Visitor Center. Yet another amazingly helpful Canadian quickly validated our decision to stop in, which is uncharacteristic of me to do so. He told us about the amazing network of rail-to-trail bike paths, best places to eat, and even got on the phone to find us one of the last remaining places to spend the night. We realized that serendipity had struck once again as the host showed us our room at the Bayview Pines Country Inn, it was perfect!

Along some 15 miles of gravel cycling (included crossing an old railroad tressel high above a river), we sampled wild apples growing trailside and some were remarkably tasty, in addition to being free and 100% organic! As we sat around a fire pit on the banks of Mahone Bay that evening we realized that another day was needed to explore this magical area and again we were lucky to secure the room for one more night.

On our last day, heading to visit a vineyard, we drove on Crescent Beach, which is the only beach in Nova Scotia that allows vehicles. 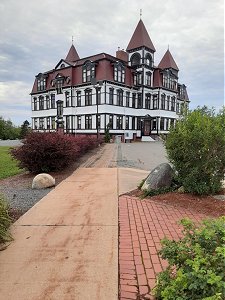 After a little sightseeing, window shopping, and a visit to the local bakery in the charming town of Lunenburg, we took a short free cable-ferry ride across a river to sample wines and local ciders, which are very popular in this province. Based on a recommendation from a winemaker, we took the main road in order to stop at the Blarney Stone for a genuine no-frills Nova Scotian diner-type lunch our way back to the Inn.

In the end, the lack of planning hadn’t undermined our trip but rather enhanced the wonder of organically discovering magical places. Our chance encounters led to wonderfully unexpected adventures. A format for future trips? I’m thinking so.

In the morning we packed up and headed north to Digby for the 3-hour ferry ride across the Bay of Fundy to New Brunswick, hoping to spot a whale before completing our journey back to the United States.

What I Did in Social Media Jail – I Became an author