Everyday is an Adventure…in Panama

XHolly Carter Background:
I spent thirty years of my life as a hairstylist in California. I owned a salon for twenty years and enjoyed a very successful and rewarding career. I have one adult daughter and have been married to my husband for thirteen years. We recently retired and expatriated to Panama. I write a blog about our experiences . We are both Native Californians and have only ever lived in one place so this adventure of adjusting to living in a foreign country is proving to be quite exciting, sometimes difficult but never boring. Our friends and family in California, while being very supportive of our move, think we are absolutely crazy to do what we are doing. We, on the other hand are thrilled everyday by our new home here in the highlands of Boquete, Panama and have not once looked back. Life is good.

Please check out my website. You can also reach me via email.

It seems as though these days, everyday’s an adventure because each morning when we wake up we remember, “Oh my gosh! We LIVE HERE!” “Where?”, You may be wondering, do we live? We live in the Republic of Panama , the District of Chiriquí , in the charming town of Boquete. 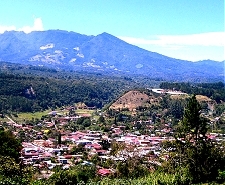 Five months ago we got off a plane in Panama City with four suit cases and two very unhappy cats (I could clearly hear them cursing in their crates), to begin the next phase of our lives living here in the Highlands of Panama. The decision to retire early (we’re both 47) and leave everything we knew behind was not a whim, noooo far from it, our arrival in our new home and the beginning of this next part of our Adventure has been a culmination of seven years of researching, planning and dreaming,traveling and researching some more. We put an incredible amount of thought and planning into this move and we realized that although we’d be pursuing a new and different lifestyle that we were very excited about, we would also be making many sacrifices. Just a few of the sacrifices being, living far away from our friends and family and living in a country with a completely different culture where they speak a language we don’t speak ( not to worry, we’re in the process of learning to speak Spanish!). Sigh.

Every retired expat we talk with has a very interesting story of how they got to be where they’re currently living. Some have expatriated because of political convictions , there are those who live abroad simply to experience a different culture, learn a language and see the world. And a vast majority of expats we’ve talked with moved out of the States in order to be able to afford to live comfortably on their social security (and they also happen to be pretty adventurous people to boot.). Our reasons are similar, after many discussions and a lot of dreaming about a change of lifestyle, we realized we had two choices in terms of moving forward in our lives. 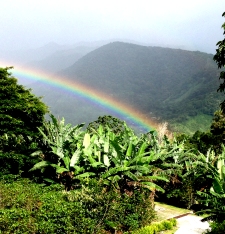 It seemed, for us our choices came down to, 1. Keep doing what we were doing and ‘Never’ retire because we wouldn’t be able to afford to live where we lived without having an income, or 2. We could retire ‘Now’, cash out and move to a place that had a much lower cost of living, and pursue a much more economical lifestyle . Hmmmmm….. What would you do if those were your two choices? Well for us it was number two, all the way!! After settling on the decision that we wanted to move someplace where we could live a less expensive life and just simplify our way of living, we began our research by considering living in a less expensive state in the U.S. or a less expensive area in California, (we are two of the few “native” Californians who have only ever lived in California. ). After pouring over a map of the states we discovered that we were extremely spoiled with the mild, many would say “perfect” climate of California. One of us would suggest a particular state, and then we would both agree, “no, too hot or too cold, or, gasp… SNOW , no way”. Thus began our list of considerations of what would make us happy if we relocated and on the top of our list was climate. In order for us to be happy with our new location we needed to live someplace that was neither too hot or too cold! I know, “Picky, Picky!”.

Somehow, probably from watching the television show, “House Hunters International”, and reading certain publications (that I won’t name) which flaunt what they like to call living in “paradise”,we began to slowly consider the possibility that we could actually move to an entirely different country. Shocking, I know! 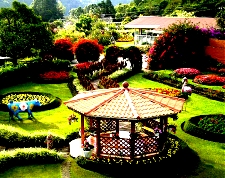 This idea of living in another country appealed to both of us almost immediately. Not because we were searching for ‘Paradise’, or running away from an unhappy life, we both have a pretty realistic perspective on the fact that there’s really no ‘Perfect’ place. Every place you live will have it’s negatives and what we were excited about pursuing was mostly a change of lifestyle and culture ,learning and growing and creating a life that would be more about “living” and less about “accumulating” and maintaining ‘stuff’. We really wanted to shift our life’s focus to living with the intention of enjoying time with each other and soaking up all the things that make us happy. Although we didn’t have to leave the country to do this, we both loved the idea of a complete “re-boot”! Starting over again with a clean slate and totally redefining our lives in a different place. To many this sounds completely bonkers, but that’s just the way we roll! (big smile!).

A Nice Cup of Tea

Retired? Bored? Want to Start Your Own Business?