La Palma? No, I don’t mean La Palma de Majorca or Las Palmas de Gran Canaria, but a little known island paradise, which is one of the seven islands (or maybe it is 8, depending upon your definition of an island, and political persuasions) that together make up the Canarian archipelago. 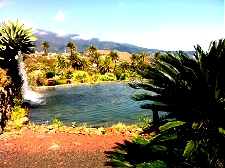 The island is the fifth largest of all the Canary Islands and many would say it is the most beautiful of all the islands. I happily subscribe to its affectionate title of ‘La Isla Bonita’ (The Beautiful Island). The island is 68 miles (126 km) from Tenerife, but don’t worry, because it is nothing like its larger, brash neighbor, and there are few tourists to bother about either, other than those walking, star gazing and enjoying a natural, unspoiled environment.

I am very fond of all the Canary Islands; each one is unique and has its own charms, as well as offering a unique perspective on life. However, if like me, you enjoy lush green grass, forests, woodlands, flowers, blue sky and unpolluted air, and a climate that is best described as an ‘eternal spring’, then this island is for you. It is a picturesque place that is beautifully maintained, and the streets are clean with no graffiti or dog excreta to be seen.

Despite the current financial climate and troubling unemployment situation in the Canary Islands, this island still gives the impression of being rather prosperous. Unlike some of its neighbors, properties appear well cared for, gardens are trimmed and buildings well painted and maintained. Cruise ships come and go, depositing hoards of gannet-like tourists each morning ready to gobble up the local delicacies on offer. However, by mid afternoon travel weary passengers return to their floating palaces ready to set sail for another day and a brief stop at yet another destination. Most seem to be unaware of where they are as they trudge reluctantly behind the tour guide, taking endless photographs that no one will ever see. After their departure, an air of calm settles over the island as the locals resume a steadier pace of life.

A regular and reliable bus service operates throughout the island, and although the timings are best described as ‘Canarian’, the bus does eventually turn up. Pretty little shelters mark the bus stops that are painted bright yellow with an orange tiled roof; complete with bus timetable and a terracotta pot for cigarette stubs. Passengers should be tolerant that the driver may need to stop the bus briefly in the forest in order to empty his bladder. After all it is a long journey with many twists and turns to negotiate. Just sit in the bus patiently and watch the lizards sunbathing at the side of the road, whilst waiting for a much-relieved driver to reappear. 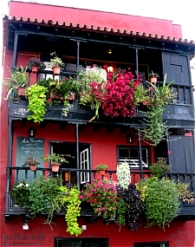 Most buildings on the island, including the bus shelters, sport roofs of the tiled and pitched variety, which I much prefer to the flat roofed creations on some of the other islands. Pitched roofs mean rain, heavy rain from time to time, but at least it is warm and keeps the island looking fresh and green. Island life is an outdoor one; it is not a shopper’s paradise. However, well-stocked Spar grocery stores adorn each village, and there is even an Ikea store to quell any longings for flat pack furniture. The island is well served with accident and emergency centers, together with a well equipped hospital and ambulance service.

Visitors may be accosted by one of the island’s ‘White Witches’; at least I think they are of the ‘White’ variety. One appeared at our side whilst we were having a quiet drink in a local bar, and I was struck by the accuracy of her diagnosis and predictions, or was that the gin talking? The bar itself was also a strange phenomena, because as it had many open windows, locals had quickly come to the conclusion that they could avoid the no smoking laws by sitting inside to smoke a cigarette by draping their arm through an open window, and popping their heads outside to take the occasional puff. Legal or not, no one seemed to mind, least of all the police officer chatting to the waitress behind the bar.

Living on a small island of this size certainly has its charms, as well as challenges. This small community is at the mercy of ferries and planes, and travel, despite hefty subsidies, is not cheap. Despite its many attractions, life without many modern conveniences can be hard, particularly for the island’s young people trying to achieve a good education and a worthwhile job, as well as for the elderly and infirm. However, experiencing this unique and green paradise, which offers complete silence under a clear night sky, with no light or air pollution, certainly takes some beating.

10 Things you may not know about Social Security