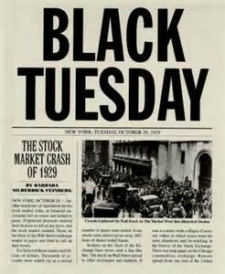 Now that I’m retired and have plenty of time on my hands, there’s no excuse to turn down my eighty-nine year old mother when she wants or needs to be driven somewhere. It isn’t that I don’t enjoy spending time with her (a lie) but what really annoys me is having to hear all about the Great Depression. Frankly, I’m sick of it. This week I drove her to H&R Block to get her taxes done. Along the way she said words I’ve heard often enough to lip-sync to: “You young people don’t know how good you have it. In my day we had the Great Depression to deal with.”

I find it amusing that she refers to me as “young.” I’m sixty-one. My mother was four years old when the Depression struck in 1929, but she still manages to take that financial fiasco personally. I imagine most of the people who lived through that era and are still with us were small children when disaster struck. I once tried to explain to Mom that it was her parents who suffered most; she was too small to worry about paying rent or feeding a family of five. At the time, my grandfather was an invalid unable to earn a living and my grandmother worked in the cannery to put food on the table. My mother didn’t appreciate my response and proceeded to blame the Depression for every setback she’d faced in her long life.

It’s true that my grandparents, like so many others, were wiped out when the banks collapsed, but let me say it again—my mother was F-O-U-R years old. Sure, bad times prevailed but everyone was poor. President Lincoln was once asked if he had a poor childhood and he responded that his family was like everyone else’s; nobody had anything so nobody felt poor. Still, I remember welling up as a child when Mom would relate how after Christmas one year she dragged a discarded Christmas tree through the snow to her house because they were too poor to buy one. Snow? In sunny California?

My late father was also bitten by the bug to blame all childhood misfortunes on the Depression. He used to tell me times were so rough when he was a child that he had to sleep with his six brothers just to keep warm, and their town was so poor he had to walk miles in the snow to reach a single room schoolhouse. Really? In sunny California?

Eighty-four years have come and gone since Black Thursday in ‘29 and I hereby proclaim the statute of limitations has passed for folks in their 80s and 90s to use the Depression as a trump card to put us youngsters in our place. With all due respect to the so-called Greatest Generation, let’s not forget that these folks also lived through the Fifties and Sixties, arguably the greatest era of prosperity our country has experienced. If I were to blame anything on the Depression it’s that when my parents finally had disposable income they were too cautious to invest in Hewlett-Packard, Boeing, Microsoft, 3-M, Apple, FedEx or countless other money-making ventures.

Having said this, I must confess to a smidge of hypocrisy. I’m as guilty as those I criticize for exploiting the past to create a “teachable moment” for the next generation. When our son was small I sat him on my lap and tried to explain that food didn’t originate in grocery stores. I plucked a pear from our kitchen fruit bowl, held it up and said, “When Daddy was a boy he lived in a house that backed up to a pear orchard. That orchard was so big that if I stood at its center I could walk for an hour in any direction without leaving it.”

There was an orchard behind our house alright, but the rest was an outright lie. I blame my dishonesty on the fact that I was traumatized as a youth by not living during the Depression and didn’t have decent tales of misery to exploit.

Our son listened intently as I talked about an orchard the size of Greenland. I could see a question growing in his periwinkle blue eyes. He finally said, “Daddy, what’s an orchard?”

After doing my best to explain, I told him about the sunny California snow I walked through on my way to school.