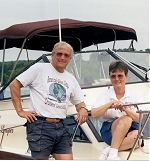 XRon and Eva Stob Background:
Ron Stob was a travel writer and photographer for the San Luis Obispo County (California) Telegram-Tribune from 1984 through 1998, taking readers along the back roads in search of the obscure and unusual. He has written books on travel from Santa Barbara to Big Sur — Back Roads of the Central Coast, More/Exploring Back Roads of the Central Coast and Exploring San Luis Obispo and Nearby Coastal Areas. Another book is about A Cat Called Canoe.

With his wife, Eva, they have written and photographed for a variety of publications. Boating magazines include Soundings, Power and Motoryacht, (formerly) Trailer Boats Magazine, and Heartland Boating. RV magazines include Highways, Trailer Life, and Coast to Coast. Other magazines include Wildlife Conservation and Bluegrass Unlimited. Their photographs often appear on magazine covers.

The Stob’s have traveled throughout all 50 of the United States and abroad. Together they learned about boats and cruised for nearly a year aboard their forty-foot trawler, Dream O’Genie. Their award-winning, best-selling book, “Honey, Let’s Get a Boat…”: A Cruising Adventure of America’s Great Loop, is the story of their 6300-mile cruise encompassing 145 locks around Eastern North America. (To date 20,000 copies have been sold and the seventh printing is work-in-progress.) Another book, Great Loop Side Trips: 20 Cruising Adventures on Eastern North America’s Waterways, covers travel aboard their 25-foot trailerable boat, Li’l Looper.

In August 1999, they formed America’s Great Loop Cruisers’ Association, a network of boaters who cruise or dream of cruising the coastal and inland waterways that comprise the Great Loop.

Ron and Eva reside with their cat, Dulci, along the shores of the Little Tennessee River on Tellico Lake in the hills of East Tennessee. They travel and discover America’s scenic areas in their 5th-wheel travel trailer, and explore the inland waterways in their trailerable cruiser. A recent interest is playing acoustic music on guitar, lap and hammer dulcimers, and autoharps and attending folk and old time music festivals. 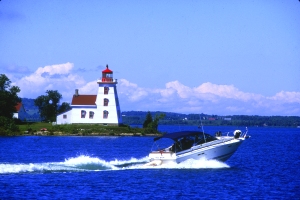 Our first three days of cruising were successful, but very tense, and then the boat fell apart. It was disemboweled and laid out on a dock in Cocoa, FL, for three weeks. Heat exchanger housing, water tanks, turbocharger, and alternator were replaced. It had a new beginning and, after that, the boat behaved like a good boat should, a veritable magic carpet that took us to historic crown colony cities on the Chesapeake, a run past the Statue of Liberty on our way up the Hudson River, cruises through historic canals, a bumpy ride through the Great Lakes, an enchanting inland voyage through the waters of the Illinois, Mississippi and Tennessee Rivers, and back to Florida again, from whence we began. We moved out of the boat, listed it with a broker and went back home to California so Eva could begin work again before Christmas.

Our trawler’s name was Dream O’ Genie, Eva’s middle name and her dream. The boat lived up to the name and made the rough places plain and a safe passage through turbulent waters. All we had to do was hang on and enjoy the ride, even when we were helpless with fear and indecision. In 6300 miles and through 145 locks we never went aground, never damaged a prop, never lost a crew member, didn’t get divorced and ended up on schedule and on budget with enough pictures and stories to last a lifetime.

Our story is, if we could do it, two “virgins at sea” with a library of manuals on the shelf and more nerve than brains, anybody can do it. “Captain Ron” drove the boat, Eva navigated, and if one of us thought we had had enough and wanted to bail, we understood that he had the keys to the boat and she had the charts. Without either of us the boat wouldn’t float.

Along the way we published a newsletter to friends and family (now everyone posts daily blogs online) and sold stories to magazines and newspapers during and following the trip. Those chronicles of our travels became the first draft of a book entitled, “Honey, Let’s Get a Boat…”, Eva’s murmurings following our Canadian trip.

“Who’s going to buy this thing?” we asked ourselves. We talked to publishers and agents and concluded that we were not hot stuff. The only solution was to do it ourselves. We quit our jobs, sold our California house and moved to Tennessee on the Tellico Lake (Little Tennessee River) with plans to publish the book and create Raven Cove Publishing. We read books on self-publishing and how to market, laid it out on the computer, hired someone to design the cover and sent the files to a Kansas book printer.

When a truck arrived and unloaded 2,200 books at our doorstep, we knew we had work to do. We didn’t have that many friends and relatives, but books are cheaper by the gross so we’d ordered a bunch. It was gambling. Our profit margin went up with each additional 500. 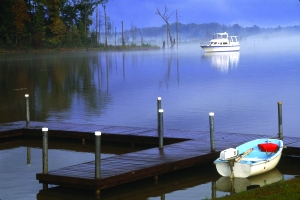 A month later we were invited to present a seminar on “Locking Through” at the Melbourne, FL, Trawler Fest. We gave the talk, exhibited and sold the book and took names of anyone who wished to become charter members of a new boating organization, America’s Great Loop Cruisers’ Association. Fourteen people signed up and we had a mandate – create a newsletter to offer advice, share information, give free ads for boats and gear for sale, and distribute a directory so members could hook up with each other. We designed a burgee and ordered t-shirts.

We became regular seminar presenters at Trawler Fests, sometimes speaking at three or four a year in different locations, as well as yacht clubs, book stores, boat shows and Power Squadron events. Our new boating organization lurched into life, then surged forward with such speed and enthusiasm that we were soon totally engulfed. Get-togethers (rendezvous) were arranged along the Loop that had over 70 boats and 250 members in attendance; we arranged for seminars, meals and Looper crawls where everybody visited each other’s boats. We were bushed. After nearly eight years, we turned the organization over to a younger, more enthusiastic couple.

Others now carry on the tradition and the activities, and the old folks sit back and watch the kids come and go on their boats, knowing they’re going to have the time of their lives.

Be safe out there, kids, and don’t forget to write.

Suggestions to improve your quality of life