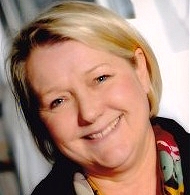 XDebra Kolkka Background:
Debra Kolkka grew up at the the Gold Coast in Queensland, Australia. She left as a teenager to travel to Italy, sparking a lifetime love affair with the country. She moved to Brisbane where she became a fashion designer. 10 years ago she and her husband bought a house in Bagni di Lucca, a small mountain village in northern Tuscany. She now spends her time travelling between Brisbane and Bagni di Lucca and writing about her travels on her blog, Bagni di Lucca and Beyond.

Check out Debra's Bagni di Lucca and Beyond blog. You can also reach her by email.

10 years ago we bought an apartment in Bagni di Lucca. We did almost no research. An Italian friend suggested Lucca as a suitable place to buy. We loved Lucca, but a home there was a bit out our price range so we headed north to Bagni di Lucca, a collection of villages in the Lima Valley, just 30 minutes from Lucca. 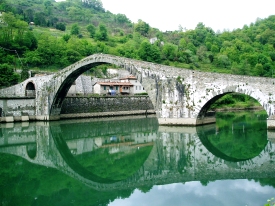 1The drive from Lucca is spectacular. It follows the Serchio River until the junction of the Lima River. Just before the spot where the 2 rivers meet is the magnificent Ponte Della Maddelena. Also called the Devil’s Bridge, it was built in the 12th century by Matilde di Canossa to allow locals access to the thermal springs of Bagni di Lucca. It stands today as an excellent introduction to this beautiful area.

Bagni di Lucca’s thermal springs have been known since Roman times, but it was in the 19th century that the area became more widely known. Napoleon’s sister, Elisa Baciocchi, was Princess of Lucca for a time and liked to spend her summers ‘ taking the waters ‘ and enjoying the cool air of the mountains. She ordered a better road to be built, opening the way for many others to follow her.

Soon the spa villages became popular with the European aristocracy and they became part of the “Grand Tour”. Byron, Shelley and the Barrett-Brownings were just a few of the famous visitors. A Protestant Church was built, quite a feat in Catholic Italy. The church remains, but today it houses a library and historical archives.

The very first casino in Europe was built in Bagni di Lucca in 1837 and it is said that the game of roulette was first played here. It no longer operates as a casino, but provides a delightful venue for concerts and events. 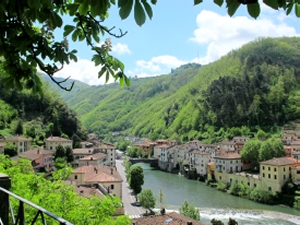 25 villages make up the comune of Bagni di Lucca. 3 villages hug the Lima River and the rest are scattered in the mountains on either side.

One of the most picturesque of the river villages is Ponte a Serraglio. I admit to a little bias here as this is where our apartment is.

The little piazza boasts 2 great cafes, where Annalisa and her team produce delicious pastries every day. I go every morning to sample these delights and soak up village life.

A brisk walk up the hill from the piazza is Bagni Caldi where the Jean Veraud thermal complex invites you to steam your aches away in one of the natural steam grottoes, one of which was the personal steam grotto of Elisa Baciocchi. After a 20 minute steam you are swathed in cotton sheets and a blanket and taken to a gorgeous room with vaulted ceilings to relax for 20 minutes before being led away to enjoy a therapeutic massage.

You need at least a week in Bagni di Lucca to explore the 25 villages and hamlets. Each one is different and has a rich historical heritage. 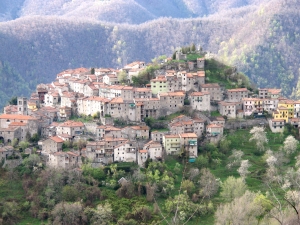 One of my favorite villages is Montefegatesi, the highest at 840 meters above sea level. The village dates from the 800s and a walk through the town reveals centuries of history.

At the very top of Montefegatesi is a monument to Dante Alighieri, an excellent point to aim for. Dante is rumored to have stayed in the village and drew inspiration for his writings there. The view from the top makes the walk worthwhile. Stand beside Dante and take it all in.

Spring and autumn are the best times to visit Bagni di Lucca…great for walking in the clear mountain air and enjoying the delights of authentic Italian villages.