July 2, 2017 |  Category:   Retirement locations, Travel  |  Add Comment
Author:   Linda Tzanos  posts:  1    Author's   bioXLinda Tzanos Background:
I was born and brought up in New Zealand and from there went to England on my 'overseas experience'. 40 years ago I came out to Greece on holiday, found my Greek man and stayed for the rest of my life.
Even after such a long time there is a lot I have to learn about this country and its language. I write a blog about life here on a small Greek island. 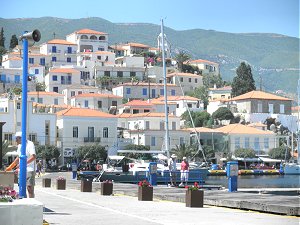 Another hot day on a Greek island. Another day of people watching down in a waterfront café. Freddo cappuccino and a sesame koulouri (bread ring) for breakfast. An ouzo and octopus as a midday aperitif before your lunch of stuffed tomatoes and peppers. Siesta, then a warm swim in the calm, clear blue waters of the Aegean and time for another ouzo. The beginning of a long warm evening on a terrace with a view of sailboats, white bougainvillea covered walls and the intoxicating scent of the night-flower which wafts along the alleyways. After the long summers day the cool night air brings you back to life. A gathering of friends, the righting of the wrongs of your world, the latest gossip, a cold beer with souvlaki and garlicky tzatziki, this is what retirement is supposed to be all about.

Sounds idyllic? It can be. Hot summer days go on and on during June, July and August. By September you’re gasping for a little rain. But the climate is not like this all through the year. Greece can have a very cold winter. Last January we had snow on our island, the first time in ten years but it does happen. Winters do tend to be short though and we often sit out in the wintry sun to drink a glass of wine and watch the bustle of the harbor. 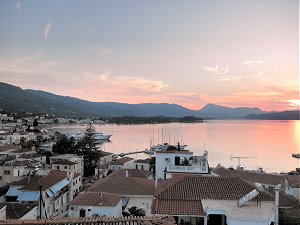 The Greek island where I live is just one hour out of Athens and its port Piraeus, a small island, permanent population around 4,000. It has quite a large expat community, largely Brits and those from other EU countries, Holland, France, Germany and Scandanavia.

The island has very little crime. You can still sleep with your windows open and my grandchildren safely wander the streets playing with their friends. Many of the Greek islands are like this, especially those more isolated.

Poros is very close to the mainland and driving around by car is the easiest way to get here from Athens or its airport. We have water taxis which take us to and fro during the day to the little town of Galatas across the waters. The ticket is only one euro. The car ferry goes every half hour from early morning till night for around 5 euros for a car and driver.

On the island itself the main mode of transport is a scooter, quad bike or a bicycle which can be bought or hired. The main roads are easy to drive but the back streets were made for donkeys and mules and a small scooter or motorbike will take you to most places where a car cannot go.

With the car ferry we are not completely isolated. A hospital is one and a half hours away by road. In an emergency there is a 24 hour health center just a short water taxi ride away. Specialists come in twice a week to the big new private medical facility. 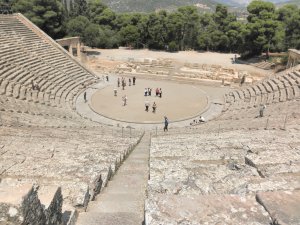 The two cities of Argos and Nafplio are in easy reach for shopping, sightseeing, and endless ancient ruins. Forty five minutes away is the 4,000 year old theater of Epidavros where in the summer you can attend classical Greek tragedies and comedies, sitting on marble tiered seats still hot from the midday sun just as they did a few thousand years ago.

Athens is close by if you want more culture. Poros does have a summer festival which includes piano recitals under the august full moon, an open air cinema on a roof top in town where you can maybe catch a glimpse of the local priest hanging out the washing on his own terrace next door. Films are the latest ones in English with Greek subtitles. There are evenings of Greek dancing down in the main square and concerts in front of the floodlit Russian ruins.

The sheltered harbor is a popular place for flotillas of small yachts to spend a night and big luxury boats tie up near the middle of town where the ‘sailors’ are within walking distance of tavernas, cafes and bars. 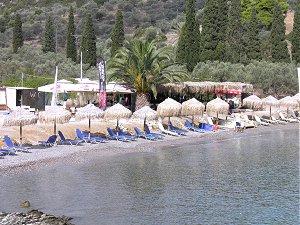 There are a few organised beaches and small coves like Love Bay which has sun chairs arranged around its tiny pine shaded beach and a small canteen. On the hills above are the remains of the Temple to the sea god Poseidon. Nearby is a rustic family taverna where you can eat under the vines.

There is an animal welfare society which organizes curry evenings with quizzes and raffles and now and again a bazaar where you can buy cheap English paper backs and the usual knick knacks. Christmas bazaars in Athens are only a few hours away. Last year I stocked up on cheap detective stories which I am still reading now.

The island has a small, twice weekly, fruit and vegetable market. There is a large (for us) supermarket where you can buy all the essentials and sometimes luxuries like peanut butter. Every neighborhood has its own little grocery shop for emergency needs. Food and drink are cheap. Wine can be bought from the plastic barrel of a local winemaker, around 3 euros for a one and a half litre plastic bottle of a very drinkable white or rose.

Positive Aging: You Can Do It If You Try (And Are Not Afraid To Modify)