An Elixir for Retirement

Many people take it upon themselves to offer advice to those of us entering into retirement. Advice flows, telling us to keep busy and don’t sit on the couch all day watching Judge Judy. My eighty-eight year old mother is no exception. I call her every day and she recently said to me, “Now that you’re retired you need to set aside your bad habits and eat better.”

I knew where this was going but when she gets a full head of steam there’s no stopping her. I waited for the inevitable. “You need to eat kale. Kale will keep you healthy so you can live long enough to enjoy your retirement.” Kale is to Mom what spinach is to Popeye. She even blanches leaves and freezes them so she can have kale on hand all year long. As far as I’m concerned kale is a vile weed and should be fed to cattle or used as a garnish.

“I hate kale,” I said for the umpteenth time. 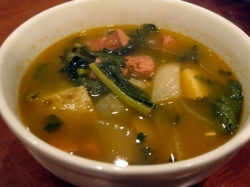 As if talking to a five year old she replied, “It’s high time you learned to like it. It’s
good for you.”

My mother has more reason to hate kale than I do. My grandparents grew it in the backyard during the Depression and fed kale soup to my mother at least five days a week. Instead of hating it, she’s been campaigning for years to get me to eat it. As a child I refused; even a chubby kid has limits to what he’ll eat.

Mom pressed on. “Yesterday I was watching the Food Channel and this famous chef was explaining how nutritious kale is.”

I’ve watched enough cooking shows to know it’s true that “foodies” are now embracing kale in a big way, touting it for being high in beta carotene, vitamin K, vitamin C, as well as being rich in calcium. Kale is a source of indole-3-carbinol, a chemical which boosts DNA repair in cells and appears to block the growth of cancer cells.