A Year And A Day 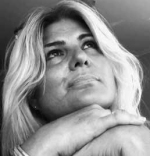 XLottie Nevin Background:
Lottie is an artist and mother of five strapping children. Career wise she’s a bit of a mixed bag but somehow she’s always managed to make ends meet. 5 years ago at the age of 46 she met the love of her life. Brought together by a mutual friend, she and Pete have traveled the world, made a dream come true in Indonesia and now live amongst the olive groves of Andalucía in Spain. Lottie writes articles for magazines and websites, as well as making her own work since starting her blog in 2011. From Spring 2015 Pete and Lottie Nevin will be running residential art courses from their home in Spain. Pete Nevin trained at The Royal College Of Art and majored in Fine Art Print Making. At 19, Lottie threw away the gift of a chance to study at Chelsea School Of Art but later on in life did a Fine Art degree at Leeds Metropolitan.

Lottie’s humourous take on life and her adventures in Indonesia and Spain can be found on her blog The Rioja Diaries’ and can be contacted by email at bettydharma@gmail.com .

Pete and I met five years ago on a blind date. I say ‘blind date’ but it was actually a meticulously engineered plan by an old school friend of mine who’d decided to do a spot of matchmaking. ‘ Lottie, he’s going to fall head over heels in love with you, and you are going to adore him too’ she told me excitedly over the phone. 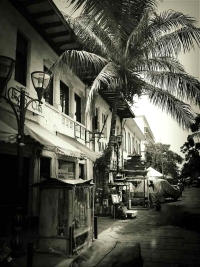 I shook my head in disbelief and couldn’t help but think that my old mucker Josephine was out of her mind and told her so.But Jo was so insistent, so determined that I should meet ‘this mad artist’ that after weeks of her nagging phone calls urging me to meet him, in the end I caved in. The rest as they say is history.

Pete and I are both artists. At the time I was working in the greetings card industry and he was head of Graphic Design at a London University. One foggy morning in early November four months after we’d first met, Pete telephoned me and said ‘How would you like to take a year off work and come with me to Bali?’ I was intrigued as to why Bali? Pete explained that the previous evening he’d listened to a Stefan Sagmeister talk on ‘The Power Of Time Off’ and it had got him thinking about life and about our future as a couple. ‘We could spend a year making our own work, Lottie. Painting, drawing, writing!’

A madcap idea it may have been, but I liked it. My only stipulation, old romantic that I am, was that ‘please could we make it ‘a year and a day’ like Edward Lear’s poem ‘The Owl And The Pussycat?’

‘Then a year and a day it shall be’ said Pete.

Shortly afterwards we moved in together. Each evening after work we’d sit down at the kitchen table and talk about how we could make ‘our year and a day’ happen. It soon became clear that even with our combined finances, the sums did not add up. Not wishing to lose heart nor give up on our shared dream, we kept talking about it, even telling family and close friends about our plan.

Well the Universe really does work in mysterious ways. Six months later Pete received an email. He had been headhunted by a company in Indonesia who wanted him to help set up a new university in Jakarta. We couldn’t believe our luck. Only the week before a letter had arrived advising Pete that he should take voluntary redundancy from his job, the new government had started making major cutbacks in higher education and the advice was to grab the money and run. 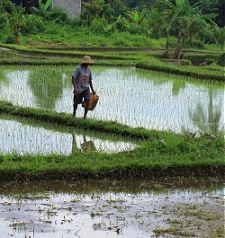 Excited and nervous, we flew out to Indonesia for a week of grueling interviews and meetings. Jakarta was like no other place that I had ever been; I was both fascinated and repelled by it. At the end of the week as we boarded our flight back to London I had a hunch that we would be returning.

And so we did, almost three months later. We handed in our notices, packed up our house and tied the knot. As we touched down on the runway at Soekarno-Hatta airport we had been married less than a month. It was the start not only of a brand new adventure, but also of our married life.

Work wise, Pete had to hit the ground running almost as soon as we arrived. I on the other hand was suddenly at a loss as to know what to do. For the first time in years I had no employment, no friends and no family close by. Not only that but I struggled to make sense of my new environment. We’d chosen to live close to the campus in a block of flats in the middle of what essentially was a huge traffic island. There were no proper walkways, no pavements and the heat and humidity was stifling. Suddenly I felt very alone and very isolated. My only escape was to brave the traffic and hail a taxi to take me anywhere, anywhere away from the claustrophobia of a tiny apartment where I spent too much of my day. None of the taxi drivers spoke any English so my first job was to learn survival Bahasa Indonesia. I wrote words and phrases down in a notebook and tried them out on the taxi drivers. Sometimes things went horribly wrong and I’d find myself being driven round in circles for hours, sometimes my bahasa was understood and I got to the place that I wanted to be. It was an education but in time I found places that I enjoyed visiting. There were malls and museums, but best of all, I loved the markets.