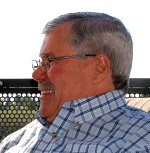 I grabbed a smelly old fishing rag and wrapped my finger, trying to stem the flow of blood. I then grabbed the tape measure from a cabin drawer and bled on it. We had to turn the fish diagonally on the cockpit sole to get him flat and straight for an accurate measurement. He was an unusually large male, tough and lean and long. He measured 68 inches, the largest male sturgeon I’ve ever seen. Ol’ Al and I together struggled to weigh the big guy with my fish scale. With a small portion of his tail still lying on the sole, the scale read 65 pounds.

We nearly doubled the fish over to get him into the big ice chest that served as my fishbox. The monster was so big that we had to tie a line around the fishbox to keep the lid closed.

After securing our big catch in the fishbox, Al and I sat heavily on the gunwales and took a break from all the excitement. I grabbed a beer and drank deeply and I don’t recall a more refreshing brew! If the afterglow of such a thrilling, rowdy fish fight as we’d just had wasn’t Miller Time, nothing would be!

When we weary, old graybeards recuperated, we cleaned up the mess in the boat, weighed anchor and headed for the ramp at Brannan Island. It had been an amazing day and we still had a big fish to clean.

I called Audie at Hap’s bait in Rio Vista, hoping that he’d be willing to clean our big catch for us. Sure! He would get the fish cleaned for us by the next morning. We drove over to Hap’s Bait where Audie cranked the monster up onto his scales and weighed him properly. He weighed in at 67 ½ pounds. Having been bled in the water, we decided he would have easily weighed 68 pounds when he was caught. 68 inches by 68 pounds!

Al had over 30 pounds of sturgeon meat to take home to Oregon along with what certainly had to be his best fishing story ever. He was a happy fella. our previous fishing adventure was three days of trolling Lake Almanor in the wind and cold for one little trout. It was not a memorable trip but Al has never let me forget it. This year’s Delta adventure turned out to be our most memorable fishing trip ever. Al experienced the excitement of a great fight with a big, tough sturgeon – the fish fight of a lifetime. Now the tables are turned on ol’ buddy Al and I’ll never let him forget!