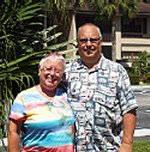 XBud Young Background:
A retired teacher traveling with his wife overseas and back. Amateur photographer enjoying retired life out of the snow and cold. Photo: Bud and Jane Young

Check out the Young's website. You can also reach them via email.

When we left the airport I was not a happy camper and the direction they gave me did not help. There were four roads leading out of the airport. The first three we took were wrong. Finally on the right road we headed for Blarney, Ireland and the Blarney Castle. We were running later than we had planned, but we had reservations at an inn near the castle. Or so we thought. When we arrived the clerk looked at us funny when I told him our name. He ran upstairs and got the owners. I looked at Jane and shook my head, “this isn’t going to be good” I told her. The owner came over and started to apologize. They had overbooked and there was no room at the inn. He said they booked a room for us at a great nearby place and he would showed us the way.

I pulled out of the parking spot onto the road, over to the shoulder, to wait for him to come in his car. In Ireland the steering wheel is on the wrong side of the car (on the right) and you drive on the wrong side of the road (on the left). As I pulled over to the side by what I thought was a hedge I heard a scraping sound. Unfortunately it was a hedge covering up a rock wall. So if you’re heading to Ireland remember that many of the hedges along the road are rock walks. And there is no shoulder on the roads.

The place we stayed at was great and owner who took us there said he would like us to come back with him and he would treat us to a meal and drinks because of the screw up with the room. He also offered to provide a ride back to our hotel. That sounded good because I was not in the mood to drive again that night. I had several beers and a nice steak meal. Would have enjoyed it more if I wasn’t worrying about the damage to the car.

The next morning we headed to the Blarney Castle and climb all the way to the top. It is a difficult climb with very narrow winding stairs. Let me say at this point that my wife Jane is afraid of heights. But she is a trooper and went up anyway. But by the time we got to the top she was too shaky to kiss the Blarney Stone. She did take a picture of me kissing it though. In all it was a visit and I would highly recommend it.

Now on to our home for the next month. A cozy cottage just outside of Kenmare. 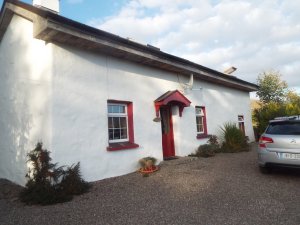 A little white cottage with red trim (no thatched roof) with a wood fireplace. It was absolutely great and our landlords were wonderful. This was a great main base to travel the southern part of Ireland.

I can’t go into detail about every place we went, (it would be more of a book then just a post), but I will tell you that we visited The Ring of Kerry, The Dingle Peninsula, The Beara Peninsula and all the way down to Mizen Head. The people in Ireland are fantastic, the food is excellent, (we did not have a single bad meal) and the scenery was spectacular. It took a long time to travel from one spot to the next because I stopped everywhere to take pictures.

I would highly recommend a visit to Ireland. We went in October and expected it to be cold and wet. It was neither. We had a beautiful month, that went by way too fast. We wanted to travel and stay longer overseas to visit Italy and maybe Greece and stay a couple of months in each area. The problem is you are only allowed to stay in the Schengen Zone a total of 3 months, then you must leave for 3 months.

We headed to this region to possibly find a place to live. We had been doing research and reading the articles in International Living magazine. They advertised that you could live as cheap as $1100 – 1500 a month in places like Belize, Panama, Ecuador or Costa Rica. At this time Ecuador was the cheapest as the others were getting more popular and thus the price was rising. 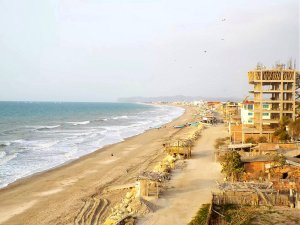 So our first stop was Crucita Ecuador. A very small fishing village on the Pacific coast. Our condo was one of the newer buildings in the small town. It was a very nice condo with many windows providing a view of the ocean. We were basically only 25 to 30 yards from the beach. The problem was that the beach was in a third world country. Now before I go any further we had no illusions of it being like the United States, which is one reason we were looking there. But we figured the cheap cost of living would outweigh the inconveniences. It turned out that that was not the case, at least for us.

First prices are NOT cheaper there, in fact, depending what you are looking for they are more expensive. And the bigger cities are more expensive. Clothes and groceries prices were high even for some of the local products. The only thing that was a great bargain was the beer at about 86 cents for a 22 oz bottle, delivered to our condo. This was nice after the prices in Paris. But even I couldn’t drink enough to drown out the other issues. I would not recommend moving there.

Another Year: Another Memorial Day