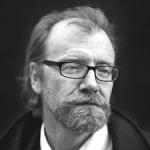 XGeorge Saunders Background:
George Saunders is the author of the short story collections "Pastoralia," "CivilWarLand in Bad Decline" (both New York Times Notable Books) and, most recently, "In Persuasion Nation." “CivilWarLand in Bad Decline” was a Finalist for the PEN/Hemingway Award. “In Persuasion Nation” was one of three finalists for the 2006 STORY Prize for best short story collection of the year. Saunders is also the author of the novella-length illustrated fable, "The Brief and Frightening Reign of Phil" the New York Times bestselling children's book, "The Very Persistent Gappers of Frip," illustrated by Lane Smith, (which has won major children's literature prizes in Italy and the Netherlands), and, most recently, a book of essays, “The Braindead Megaphone.”
His work appears regularly in The New Yorker, GQ, and Harpers Magazine, and has appeared in the O'Henry, “Best American Short Story,” “Best Non-Required Reading,” and “Best American Travel Writing” anthologies. In support of his books, he has appeared on The Charlie Rose Show, Late Night with David Letterman, and The Colbert Report.

Writing for GQ, he has traveled to Africa with Bill Clinton, reported on Nepal 's “Buddha Boy” (who is said to have gone without food or water for months on end), driven the length of the Mexican border, spent a week in the theme hotels of Dubai, and lived incognito in a homeless tent city in Fresno, California .

In 2001, Saunders was selected by Entertainment Weekly as one of the 100 top most creative people in entertainment, and by The New Yorker in 2002 and one of the best writers 40 and under. In 2006, he was awarded both a Guggenheim Fellowship and a MacArthur Fellowship. In 2009 he received an Academy Award from the American Academy of Arts and Letters. He teaches in the Creative Writing Program at Syracuse University.

Site Editor’s note: While we typically do not post material that was already published elsewhere we felt that the following convocation speech delivered to the graduating class of 2013 at Syracuse University by renowned professor and author George Saunders is exceptional and would be of interest to our readers. Mr. Saunders has kindly agreed to allow us to post the following speech.

Down through the ages, a traditional form has evolved for this type of speech, which is: Some old fart, his best years behind him, who, over the course of his life, has made a series of dreadful mistakes (that would be me), gives heartfelt advice to a group of shining, energetic young people, with all of their best years ahead of them (that would be you).

And I intend to respect that tradition.

Now, one useful thing you can do with an old person, in addition to borrowing money from them, or asking them to do one of their old-time “dances,” so you can watch, while laughing, is ask: “Looking back, what do you regret?” And they’ll tell you. Sometimes, as you know, they’ll tell you even if you haven’t asked. Sometimes, even when you’ve specifically requested they not tell you, they’ll tell you.

So: What do I regret? Being poor from time to time? Not really. Working terrible jobs, like “knuckle-puller in a slaughterhouse?” (And don’t even ASK what that entails.) No. I don’t regret that. Skinny-dipping in a river in Sumatra, a little buzzed, and looking up and seeing like 300 monkeys sitting on a pipeline, pooping down into the river, the river in which I was swimming, with my mouth open, naked? And getting deathly ill afterwards, and staying sick for the next seven months? Not so much. Do I regret the occasional humiliation? Like once, playing hockey in front of a big crowd, including this girl I really liked, I somehow managed, while falling and emitting this weird whooping noise, to score on my own goalie, while also sending my stick flying into the crowd, nearly hitting that girl? No. I don’t even regret that.

But here’s something I do regret:

In seventh grade, this new kid joined our class. In the interest of confidentiality, her Convocation Speech name will be “ELLEN.” ELLEN was small, shy. She wore these blue cat’s-eye glasses that, at the time, only old ladies wore. When nervous, which was pretty much always, she had a habit of taking a strand of hair into her mouth and chewing on it.

So she came to our school and our neighborhood, and was mostly ignored, occasionally teased (“Your hair taste good?” – that sort of thing). I could see this hurt her. I still remember the way she’d look after such an insult: eyes cast down, a little gut-kicked, as if, having just been reminded of her place in things, she was trying, as much as possible, to disappear. After awhile she’d drift away, hair-strand still in her mouth. At home, I imagined, after school, her mother would say, you know: “How was your day, sweetie?” and she’d say, “Oh, fine.” And her mother would say, “Making any friends?” and she’d go, “Sure, lots.”

Sometimes I’d see her hanging around alone in her front yard, as if afraid to leave it.

And then – they moved. That was it. No tragedy, no big final hazing.

Now, why do I regret that? Why, forty-two years later, am I still thinking about it? Relative to most of the other kids, I was actually pretty nice to her. I never said an unkind word to her. In fact, I sometimes even (mildly) defended her.

But still. It bothers me.

So here’s something I know to be true, although it’s a little corny, and I don’t quite know what to do with it:

What I regret most in my life are failures of kindness.

Why Financial Independence is a Better Goal than Retirement